Be the first to review this product
As low as $31.80
In stock
SKU
MED1004
Accu Chek Active is used for determination of blood glucose. Buy Accu Chek Active from Online drug Pharmacy at best prices in USA. 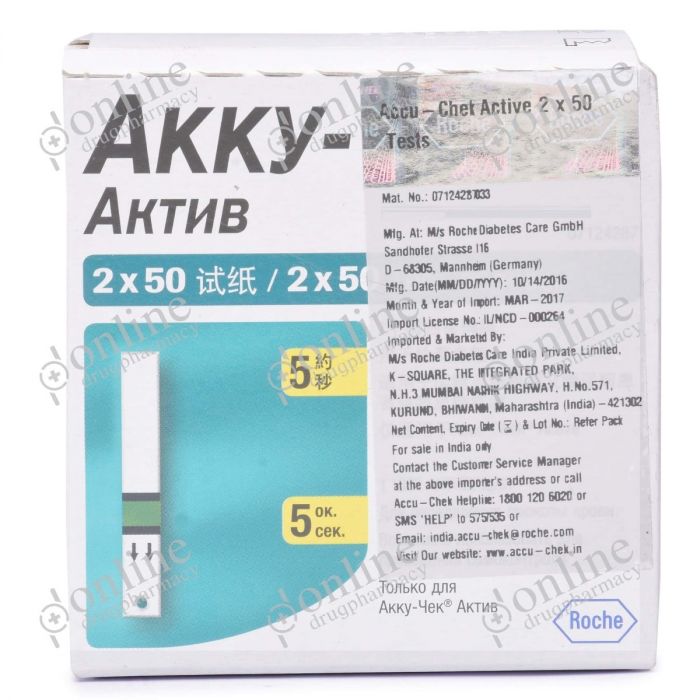 Accu chek active is used for the determination of blood glucose levels.

There are many glucose testing meters available in the market equivalent to Accu Chek active. Some of them are:

Accu Chek Active is sold globally by Roche, Germany and is available at all the leading online pharmacies, drug stores, and hospitals. It is widely used all over the world. Roche, Germany also produces many other varieties of blood glucose meter strips. Some of them are as follows:

It is used for determination of blood glucose levels and is majorly used by patients suffering from type 2 diabetes mellitus. It is a very useful aid during screening programmes and in tight glycemic control protocols.

Accu Chek Active are test strips for determining blood glucose level manufactured by Roche, Germany. It is one of the leading brands prevailing in the USA. These blood glucose test strips are available in all the pharmacies, drug stores, and medical supply stores.

The test strip contains a dry layer of enzymes, coenzymes, mediators and indicators and this dry layer converts blood glucose concentration into a signal which the glucometer reads.

When should one check blood glucose levels?

Blood glucose levels can be tested in a fasting state that is when one has not eaten food for at least 8 hours and is usually taken in the morning.

How to use Accu Chek Active (Blood Glucose Meter)?

Accu Chek Active test stripes are a biosensor reagent complex which contains a dry layer of enzymes, coenzymes, mediators and indicators and this dry layer converts the blood glucose concentration into a signal that the glucometer reads.

What precautions are to be taken before measuring blood glucose levels?

these drugs interfere with glucose measurement by glucose meter more than 6mg/dL.