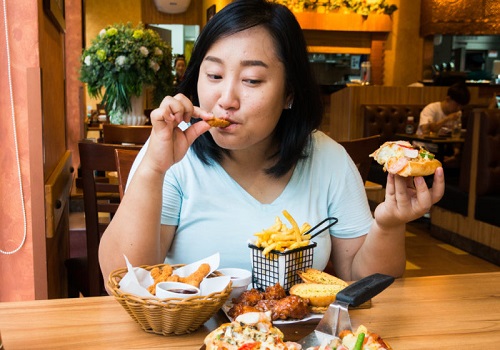 The term binge is itself negative, anything that is binge can never be healthy. The binge is a term that is used to indicate the indulgence in any activity in excess. Binge eating disorder is a serious medical condition that requires consultation from a doctor and is characterized by the loss of control on the quantity of food consumed.

According to one of the studies, the process of binge eating can be divided into four stages:

Stage 1 - Tension build up -  This is the very first stage of binge eating in which is characterized by the feeling that bothers you and demands for relief.

Stage 2 - Tension release - This is that stage of binge eating in which a person releases its tension by binge eating. A person is relief in this stage.

Stage 3 - Post binge - In this stage, a relief is soon replaced by the occurrence of symptoms that cause health problems such as diarrhea, headache, and nausea.

Stage  4 - New beginning - It is characterized by the feeling of disappointment that might be followed by the thought of a diet.

Also Read : Things You Should Know About Erection Problem

Binge eating disorder is associated with a significant reduction in the quality of life of the sufferer as it is associated with both psychological and physical suffering. Many people feels this condition to be a shameful one. Low self esteem is a commonly occurring psychological problem with this eating disorder. Many people feel distressed due to overeating and their out of the control feeling towards the food. This makes it difficult to manage mood and other feelings, resulting in a negative or sad mood and other feelings.

Obesity is defined as a metabolic disorder which is characterized by the accumulation of excess fat in the body. The buildup of fat in an obese is to such an extent that it affects almost every part of the body. Obesity is known to be a result of the imbalance between calorie intake and energy expenditure. In other terms, when the intake of calories is more than the required by the body, it starts to get accumulated in the body. Energy expenditure helps to maintain only the required amount of calories in the body. But when the calories exceed the requirement, fat accumulation occurs.

Obesity is one of the most common disorder, affecting millions of people. Although obesity is a single disease, its effects are wide. Binge eating disorder also increases the risk of dying from cardiovascular disease.

Binge eating causes various changes in the body, including an increase in the blood glucose level.

High Blood glucose level is one of the common complications of binge eating. Overeating can have a significant impact on the glucose level in the blood and over time, it could lead to the development of diabetes mellitus.