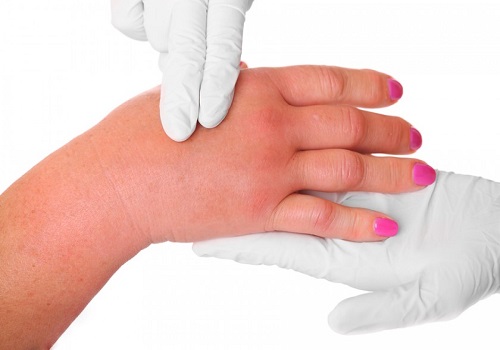 When the body is exposed to an antigen, various reactions begin. Generally,  allergic reactions are different for everyone and the reaction time can vary differently from one person to another. Some of the most common allergens include:

Allergic conjunctivitis can affect both children and adults and most often, it coexists with other allergic diseases such as asthma, atopic dermatitis, and allergic rhinitis. This allergic reaction can also affect the eyelids and can lead to the swelling of the loose tissues of the lid.

Asthma is one of the most common allergic reactions that is defined as a chronic disease of the airways and is characterized by repeated episodes of wheezing, cough, chest tightness, dyspnea. These symptoms often get worse at night and in the presence of environmental triggers. Asthma can be inherited from the parents through the genes or if there is any family history of asthma. Asthma is a disease which occurs when the airways, which are the breathing tube that carry air in and out of the lungs, become narrow and makes it difficult for the body to carry air in and out of the lungs.

The airways of the patients having asthma become very sensitive and easily get irritated by triggers. Pollens are the most common allergens that trigger the symptoms of asthma and these pollens can come from weeds, grass, molds, dust mites and many more. Some other irritants that can cause asthma include:

Each person having asthma have different triggers and if the lungs of the person become irritated enough, it can cause an asthma attack. An asthma attack is a serious condition and it is defined as worsening of the symptoms of asthma.

Chronic urticaria is an inflammatory skin condition which is characterized by swelling which occurs below the skin instead of the skin. Urticaria is also characterized by the red, raised and itchy rash that can occur due to vasodilation and increased vascular permeability. It is believed that Chronic urticaria can be genetic which means that if the parents have or had this type of allergy or have any family history of this disease. The symptoms of this disease can be triggered by various things such as medicines, food, preservatives, exercise, stress, sunlight, and contact with any cold substance.

Urticaria can also be triggered by physical factors such as heat, cold, friction, pressure on the skin and even by water and the effects of these factors can be seen within minutes. Most often, the physical urticarias are improved by avoiding the triggers. The severity of the symptoms can vary greatly from one person to another and it can vary from mild symptoms to severe symptoms.

Anaphylaxis is defined as a severe systemic hypersensitivity reaction and the onset of symptoms that occur in this disease is very fast, typically within 30 minutes of exposure. In most cases, it begins in 5 to 10 minutes. It is a multisystem allergic reaction which involves the respiratory and cardiovascular system. It can also involve skin and cause symptoms like rash, itching, and flushing. Some of the respiratory symptoms that occur in anaphylaxis are:

Some of the cardiovascular symptoms that occur in anaphylaxis are:

Some patients exhibit biphasic allergic reactions which involve symptoms of anaphylaxis occur hours after the early phase of the reaction has waned, and in some patients, late-phase reactions occur without initial hypotension or airway obstruction. Some of the common allergens that can cause anaphylaxis, include foods such as peanuts, walnuts, almonds, fish, dairy products and eggs. Some studies have suggested that although this disease can affect people of both genders, women are more likely to develop this disease as compared to men.  It is a serious disorder and the severity of the symptoms can vary from person to person. Every person can have different triggering allergens and the symptoms can vary from mild to severe.

Tags:  How your pets can make you sick,  Causes of ragweed allergy, Pressure points to relieve asthma, Seasonal affective disorder