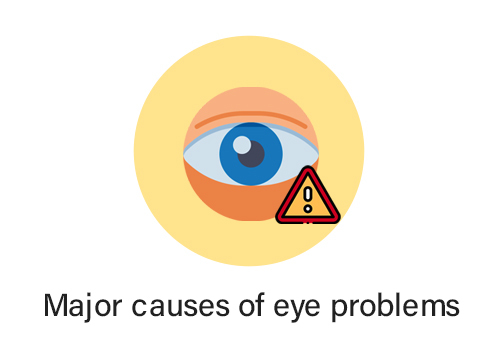 In the United States, eye disorders and diseases are considered as the leading cause of blindness and low vision with the increase in age. Age-related macular degeneration, cataract, diabetic retinopathy, and glaucoma are some of the most common eye disorders.

In fact, more than 4.2 million Americans aged 40 years and older are either legally blind or are with low vision, says the Center For Disease Control And Prevention.

Vision is somewhat necessary for every human, and any complications in vision are a matter of concern. The human eye has a complex arrangement of nerves and organs that need to remain healthy, nourished for proper vision. Complications in any of the parts of an eye can be a threat to your vision.

See if any of these major causes of eye problems sound familiar to you.

What Are Some Of The Most Common Problems Affecting The Eyes?

After surveying some of the certified information( Division of Diabetes Translation, National Center for Chronic Disease Prevention and Health Promotion, Center for Disease Control and Prevention) about the major causes of eye problems, here are some common eye infections.

It is a condition in which the eyes become unable to bend light correctly, causing blurred vision. Many eye disorders come under this condition, but the major ones are:-

This usually occurs between the ages of 40-50 years, which can be cured through eyeglasses, contact lenses, or surgeries in some cases. Only if refractory errors is improved, 150 million American’s vision complication will be resolved.

It is a condition in which a part of your retina, macula, gets injured, damaged, or wears down and worsens with the growing time. It is considered the leading cause of severe, permanent vision loss in people over 60 years of age(associated with aging).

People with macular degeneration often use central vision for seeing objects clearly and in their day to day activities, like reading and driving. AMD directly affects the central vision that allows the eyes to see things.

When abnormal blood vessels located behind the retina start to grow abnormally under the macula, resulting in blood and fluid leakage.

This causes damage to blood vessels and leads to rapid central vision loss. People at an early stage of AMD experience straight lines as wavy lines.

It is a condition in which the macula becomes thin as a part of the aging process. This form of AMD is more common in AMD patients; 70-90& cases of AMD have dry AMD. The sad part is dry AMD usually affects both the eyes with a most common symptom; drusen.

Cataract: It is a condition causing a clouding area in the eye's lens, decreasing the vision ability. Cataract happens very slowly and can affect one or both the eyes. Faded colors, blurry or double vision, halos around light, trouble with bright lights, and trouble seeing at night are some of the most common symptoms of cataracts.

Diabetic Retinopathy: It is a result of a diabetic condition that affects the eye by damaging the blood vessels of the light-sensitive tissue at the retina's back. It starts with mild vision complications and is divided into four stages:-

Such complications can be resolved by controlling blood sugar, cholesterol level, blood pressure, and lipid abnormalities. Early diagnosis may help you reduce the risk of vision loss.

Glaucoma: It is a group of eye complications that damages the optic nerves; responsible for good vision. Damage to optic nerves is often caused by abnormally high pressure in your eyes.

It is considered one of the major causes of eye problems(blindness) for people over the age of 60 years. In Glaucoma, the normal fluid pressure inside the eyes slowly rises, causing pressure on the optic nerve and in the eye from inside. You can purchase Eye Care Medicine & Generic Medicines in USA .

Glaucoma is of two different types, such as:

The most common form of glaucoma in which the drainage angle formed by the cornea and iris remains open, but the trabecular meshwork remains open, causing pressure in the eye to gradually decrease.

Also known as angle-closure glaucoma that occurs when the iris bulges forward and narrows the drainage angle formed by cornea and iris.

Amblyopia: It is one of the major causes of eye problems in which the brains fail to process inputs from one eye and, over time, favors the other eye. Consequently, it leads to a decrease in the vision that otherwise typically appears normal.

Strabismus (an imbalance in the positioning of the two eyes), nearsighted, farsighted, or astigmatic, and other major causes of eye problems, such as cataracts, are common causes of amblyopia.

In most cases of strabismus occurring in children, the cause is unknown. During such eye conditions, with time, the brain learns to ignore the input from one eye, resulting in permanent vision loss.

Night Blindness: An eye condition in which people with it will experience poor vision at night or in dim light environments. It is also known as nyctalopia. In fact, by the term night blindness, it is clear you will be able to see clearly at night or in low light.

5.2 million preschool-age children are suffering from night blindness, along with 9.8 million pregnant women.