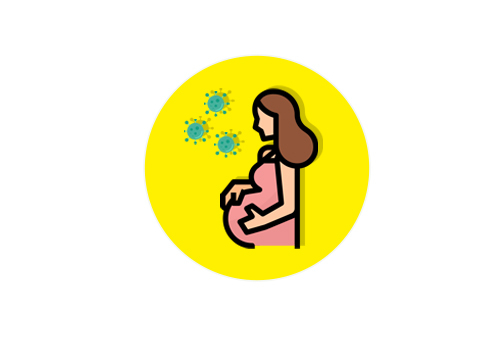 What Is Dry Cough?

A dry cough is a non-productive type of cough that doesn’t bring up mucus or phlegm. Dry coughs are often temporary and rarely a cause for concern. Dry coughs are difficult to manage and may present for a more extended period of time. Such dry coughs are usually caused by upper respiratory infections, such as colds or flu.

Many things can cause a dry cough, from allergies to acid reflux, but there is no obvious cause in some cases. But despite this, a dry cough can severely impact your day-to-day life, especially when you expect a baby.

This article will cover the possible causes of dry cough and ways to get relief from it during pregnancy.

What Can A Dry Cough Be A Sign Of During Pregnancy?

When a person is suffering from dry cough, it indicates the occurrence of the following health complications:-

Asthma: It is a condition in which the airways swells and consequently get narrowed. Asthma-related cough can be both productive and non-productive, but mostly its non-productive(dry cough).

Coughing is the general symptom of asthma but not necessarily the prominent one. A type of asthma known as cough variant asthma(CVA) causes chronic dry cough as its main symptom. Such type of asthma may also lead to the following symptoms as well, such as:-

Gastroesophageal reflux disease(GERD): It is a condition in which the stomach acid regularly flows back up into the esophagus. This tube-like structure connects the mouth to the stomach. It can irritate your esophagus and triggers the cough reflex.

GERD can also lead to other following symptoms:-

Postnasal drip: It is a condition in which extra mucus is dripping down your throat. In case of cold or seasonal allergies, the membranes in your nose start to produce more mucus than normal. The mucus produced in such a situation is more waterly and thus drips down the back of the throat. This dripping of the mucus tickles the nerves in the back of the throat, triggering the cough.

The other possible symptoms of postnasal drip other than a dry cough are:-

Viral infection: The symptoms of one of the many viruses causing the common cold usually last less than a week. It is very common to experience cough to linger for a bit longer after improving symptoms.Such post-cold cough are usually dry and may last for two months. This usually occurs as the result of irritation in your airways, which is often overly sensitive after a viral illness.

Some of such viral infection causing dry cough is difficult to treat and often requires time and patience. Coughing increases the airways' irritation, so try using throat lozenges and warm liquids to soothe the throat. This will consequently reduce the coughing, providing your airway a chance to heal.

Environmental irritants: Many things in the air irritates the airways, such as the habit of smoking, pollution, dust, mold, and pollen. Some chemical particles, such as sulfur dioxide or nitric oxide, also cause problems. Even clean air that is too dry or too cold also causes a dry cough for some people. Therefore, if you live in a dry climate, try using a humidifier to add some moisture to the air in your home.

ACE inhibitors: Some ACE inhibitors may cause chronic dry cough as the result of some most common side effects. Such drugs include enalapril (Vasotec) and lisinopril (Prinivil, Zestril). As per Harvard Health, almost 20% of the people consuming ACE inhibitors experience dry cough.

Whooping Cough: Also known as pertussis, is a very contagious condition that causes severe dry cough followed by high-pitched whooping cough while breathing. Its symptoms are similar to the common cold, and thus, people usually get confused with it.

Whooping cough is used to the most common disease, but most children are currently vaccinated against it. Still, it is mostly found in children who are too young to get the vaccine or adults whose immunity has decreased with time.

Collapsed lung: It is a condition when the lung suddenly deflates that occurs either on its own or as a result of a chest injury. It is also known as pneumothorax that is more common in people with underlying lung disease. A collapsed lung may also cause dry cough leading to chest pain and shortness of breath.

Lung cancer: Mentioning lung cancer in this section doesn’t mean a dry cough is a sign of lung cancer. It just cough related to lung cancer usually doesn’t go away but may change with time. For example, coughs in such cases might be more painful or have a different sound.

Apart from dry cough, lung cancer has other following symptoms, such as:-

The other symptoms are also mentioned so that you may not confuse between a dry cough and lung cancer.

Heart Failure: It is a condition in which heart muscles fail to pump blood as it supposed to be. It’s more common in people with health conditions- coronary artery disease and high blood pressure that decreases the heart's ability to pump blood effectively.

What Are The Symptoms Of Dry Cough?

A person with dry cough may face other additional symptoms as per their severity, such as:-

What Helps A Dry Cough While Pregnant?

It is one of the oldest home remedies for treating any cough. Raw honey coats the throat and has natural anti-inflammatory properties that help ease throat irritation. Its antimicrobial effects have the potential to temper minor bacterial or viral infections.

Breathing in steam is one of the most effective home remedies, and everyone is aware of it. Warm steam with or without additive helps by moisturizing dry and irritated nasal passage, ease throat pain, and reduce the cough's severity.

It is a traditional Chinese medicine where licorice root is used since 2100B.C for treating alleviate pain, clearing phlegm, and ease cough. These roots can be easily found in many grocery stores.

Gargling with salt water is a home remedy that every doctor will recommend to ease the mos common throat complications. The salt water is osmotic that changes the direction of the fluid/mucus by drawing moisture away from the sore area, reducing swelling and irritation.

It is a type of oregano that has long been used in traditional medicine to relieve a wide range of health complications. It contains anti-inflammatory plant-based compounds, such as phytochemicals, that may ease cough linked with asthma, bronchitis, cold, and pertussis.

As per the name, it is the root of the marshmallow plant used since ancient times to relieve sore throat and inflammation. Some of the syrups and tablets are made up of marshmallow root extract effective in reducing mild dry cough, usually in 10 minutes.

This home remedy had been a dry cough home remedy since the Black Plague in Europe. The thyme contains a compound known as thymol, causing antispasmodic effects that help relax the throat's smooth muscles.

It contains a compound called curcumin, having mild antiviral, antibacterial, and anti-inflammatory properties helpful in Ayurvedic medicines for treating everything from arthritis to respiratory disease.

This mode of home remedy has long been used to treat nausea and upset stomach, along with the evidence to suppress the cough reflex by relaxing the airway's smooth muscles. However, it is important to avoid consuming too much ginger as it may cause stomach upset, heartburn, or diarrhea.

Just like turmeric, garlic also has mild antiviral, antibacterial, and anti-inflammatory properties that lower blood pressure and boost the immune system. It helps to relieve cough-related complications, although most studies investigating the effect have been mixed.