Ever Heard Of Generalized Tonic-Clonic Seizure 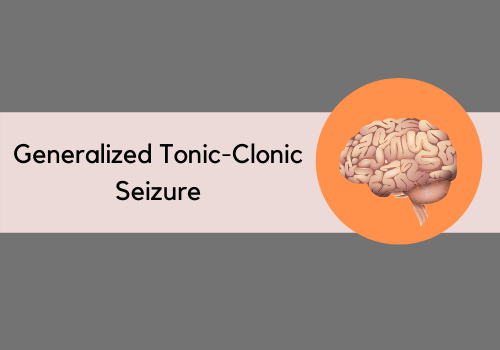 What Is Generalized Tonic-Clonic Seizure?

A generalized Tonic-clonic seizure is a medical term that defines a type of seizure in which both the sides of the brain of a person experiences a disturbing impulse. As a result, the brain starts spreading inappropriate electrical signals often to muscles, nerves, or glands. These inappropriate signals may result in loss of consciousness and severe muscle contractions.

A generalized Tonic-clonic seizure sometimes also known as grand mal seizure which is generally associated with a medical complication known as epilepsy. Apart from epilepsy, some other medical conditions may also result in grand mal seizure, such as extremely low blood sugar, high fever or a head injury. A person withdrawing from drugs or alcohol addiction may also have to experience a seizure as a part.

The name Tonic-clonic seizure is a combination of two stages. Initially, in the tonic stage, your muscles may stiffen, you may lose your consciousness and fall down. Secondly, the clonic stage which may lead to rapid muscle contraction and sometimes convulsions. The tonic-clonic seizure will occur up to 1 to 3 minutes, but in case it lasts for 5 minutes or more, considers it as an alarming situation(medical emergency).

The signs and symptoms of a generalized tonic-clonic seizure may begin to have in late childhood or adolescence, but such type of seizures are rarely found in children younger than 2 years. Sometimes the seizure may happen because of a temporary alteration in the brain, but such seizures are not at all related to epilepsy and can occur in any stage.

The severity of the seizure depends on the history of epilepsy or other medical conditions. But do not ignore it from the time you experience it for the first time, especially if you have a history of brain injury or you experience a cluster of seizures.

What Are The Causes of Generalized Tonic-Clonic Seizure?

At the time of seizure, the electrical impulses alter and many nerve cells fires. The exact reason for such an altercation in the brain is still unknown. However, a generalized tonic-clonic seizure can be caused due to some medical complications, such as:-

Additionally, there are some factors that trigger the generalized tonic-clonic seizure symptoms, such as:-

What Are Generalized Tonic-Clonic Seizures Symptoms?

In case you are having a tonic-clonic seizure, you may experience symptoms in two phases such as:-

Tonic phase: It is the initial phase that may last about 10 to 20 seconds.

There are other general symptoms of that may also occur, such as:-

How To Diagnose Tonic-clonic seizure?

The generalized tonic-clonic seizure symptoms can result in severe mental issues, therefore, immediately consult the doctor in case you experience it. The doctor may ask for medical history, neurological exam, blood tests and medical imaging in order to test your motor skills and mental functioning.

For epilepsy diagnosis, the doctor needs to know about other conditions that are responsible for seizures and will probably prescribe a blood test to know your:-

There are other tests that your doctor may ask you to undergo, such as:-

Electroencephalogram (EEG): It is the most common test that helps in diagnosing generalized tonic-clonic seizure symptoms. Initially, electrodes are attached to your scalp with a paste without a noninvasive pain.

This test is sometimes performed during sleep and the doctor may ask you to perform some activity during the test. The electrodes attached to your scalp will record the electrical activity of your brain. The recorded data will determine whether you’re having a seizure or not.

Tumours and other abnormalities can also be a reason for the severe seizure. Therefore, imaging tests are preferred to reveal them, such as:-

How Can You Treat Generalized Tonic-Clonic Seizure?

There’s no cure for epilepsy, but generalized tonic-clonic seizure treatment can help in reducing the symptoms of it. Epilepsy if not treated, may damage your brain and also increases the risk of sudden unexplained death. But such disorders can be successfully managed and controlled with the help of medication.

Such medication cannot cure epilepsy, but it may reduce the frequency and severity of it. These medicines are consumed orally with a glass of water which further gets absorbed by the stomach, travelling through the bloodstreams it finally reaches to the brain affecting the neurotransmitters in such a way that it reduces the symptoms of epilepsy.

The example of such medicines are as follows:-

Apart from the medications, the treatment depends on the severity of the symptoms, health, and your response to the therapy, such as:-

Vagus nerve stimulator: It is a device that electrically stimulates the nerves through the chest and neck to the brains. It is placed surgically under the skin on the chest to help prevent seizures.

Ketogenic diet: Most of the patients who have epilepsy help themselves to reduce the symptoms of it by consuming a ketogenic diet, having high fat and low cholesterol.

Brain Surgery: Surgery of the brain in which the seizure affected part is removed or altered.

Since in some cases, the reason for generalized tonic-clonic seizure is not yet specific and so is the treatment, the research is going on for the treatment of such neurological disorders. In the coming days, treatment may be in which electrodes are placed in your brains along with a generator which is implanted in your chest in order to generate electrical impulses to help detect and decrease seizures.

There are certain things that a person should keep in mind if he/she is having a generalized tonic-clonic seizure, such as:-

Prevention of some of the activity is needed, such as to avoid traumatic brain injury, consume a proper hygienic diet, avoid high blood pressure, high cholesterol, smoking, and inactivity