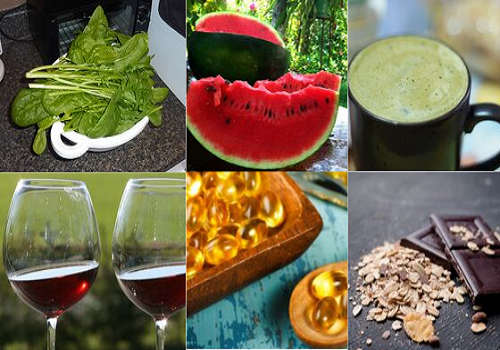 Everyone loves food, and what if some of your favorite food could actually lead to a better sex drive?

1. Spinach: Spinach is an excellent source of magnesium, a mineral that decreases inflammation in blood vessels and increasing the blood flow to the organs in the body. With an improved blood circulation in the vagina, spinach enhances arousal and makes orgasm easier, more frequent, and more pleasurable.

2. Dark Chocolate: The flavonoids in dark chocolate work as a stress reducer and relax the blood vessels and improves blood flow in all the parts of the body. By increasing the serotonin and dopamine levels, chocolate also enlightens our mood and makes us happy. Flavonoids also help in reducing body fat.

3. Watermelon: Watermelon is considered to have Viagra-like effects to the blood vessels in the body which also results in an increase in the libido. It also helps in better blood circulation in the body, especially in the lower regions. Studies reveal that it can have positive effects on the sex drive of both men and women.

4. Red wine: According to research published in the journal of sexual medicine, drinking one or two glasses of wine each day helps in boosting the sexual desire and lubrication in women. This is a result of its richness in antioxidant which supports the nitric oxide production in blood and relaxes the artery walls.

5. Green Tea: Green tea contains L-Theanine which improves the level of dopamine in the body. With a higher dopamine level, there’s an increase in the attraction level which further activates the pleasure centers of the brain encouraging sexual activity. Green tea is now considered the natural alternative to the libido stimulating drugs while being a better choice than the consumption of drugs for the same results.

6. Coffee: Coffee is proved to increase libido in females by stimulating the parts of the brain regulating the arousal. The effect is likely to be better in people who do not drink coffee regularly. Coffee has its own benefits and side effects but following a research study, it has been concluded that in humans, there will be enhanced arousal only in the cases where the person is not a habitual user.

7. Omega-3 fatty acids: Omega 3s can improve the brain levels of serotonin and dopamine - the neurotransmitters that regulate the mood and testosterone levels. The testosterone levels are considered more important for women’s libido than for men’s. It also improves the overall circulation and blood flow in the body. “Dopamine will make you feel more relaxed and connected to your partner, which makes sex more fun,” says psychotherapist and sex expert Tammy Nelson Ph.D. Foods considered rich in Omega-3 include salmon, sardines, and tuna.

Tags: Natural foods to help you last longer in bed, Foods that turn you on sexually, Foods to increase testosterone