4 Foods That Are Known To Improve Mental Health 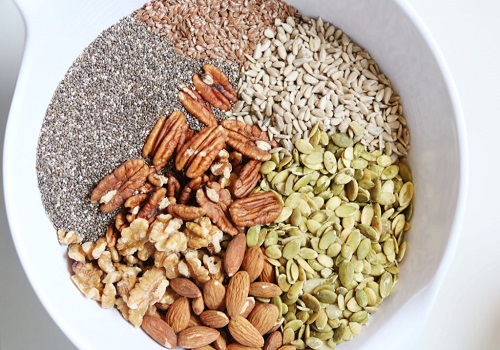 According to the World Health Organisation, mental health is a state of well-being in which the individual realizes his or her own abilities, can cope with the normal stresses of life, can work productively and fruitfully, and is able to make a contribution to his or her community.

Research suggests that an impairment in the functioning of thinking, mood, and behavior is one of the main causes of public health concerns across the world. In fact, in the United States, one in every four people is experiencing some problems with the psychological health.

In many parts of the world, pumpkin seeds are consumed raw, roasted or cooked. In the food industry, it is considered to be valuable for food industry and this is because it is highly nutritious and rich in protein, fiber, mineral phytosterols, and polyunsaturated fatty acids.

Consumption of pumpkin seeds is highly beneficial and its beneficial effects can be seen on various functions and factors that affect mental health such as depression, learning disabilities, problems with concentration, and memorizing. It belongs to the family of cucurbitaceae and has been used as a traditional medicine in many countries. It is used in the treatment of many mental health problems such as depression.

The presence of L-tryptophan in pumpkin seeds is suggested to act as a remedy for depression. Tryptophan is an essential amino acid which helps in the formation of neurotransmitter known as serotonin. Serotonin is a chemical which is sometimes known as happy chemical, as it promotes a feeling of happiness and well being. Also, it has been noticed that people who suffer from mental disorders are commonly deficient in omega 3 fatty acids, minerals, vitamin B, and amino acids.

Avocado is one of the most energetic fruits which has high nutritional value due to its richness in protein and fat soluble vitamins that usually lack in other fruits. Avocados has always been recognized for its health benefits as it contains multiple compounds that not only provide benefits to the mental health but also to other parts of the body and some of them include omega fatty acids, phytosterols, tocopherols, and squalene.

Multiple studies have shown that the consumption of avocados can significantly help in the prevention of various mental disorders as it enhances the production of many chemicals in the body that promotes happiness and wellness. It improves the overall functioning of the brain. It improves the supply of blood to the brain that ensures that the area of the brain that is responsible for functions like thinking, planning, memorizing and many more functions.

Avocado also contain tryptophan, folate, and omega 3 fatty acid that helps to reduce inflammation in the brain and treats many different types of mental disorders and prevents the occurrence of associated complications.

Nuts such as almonds, walnuts, brazil nuts are considered to be highly beneficial in the treatment of various health conditions, including mental health problems. These nuts are rich in a wide range of nutrients that are important for brain health and normal functioning of cognitive system. In fact, almonds is often considered to be a brain food.

Multiple number of studies have been conducted to investigate the role of nuts in the improvement of cognitive function and they observed that regular consumption of nuts strengthens brainwave frequencies which is associated with memory, learning, understanding and many other key functions of cognitive system.

The beneficial effects of nuts on the brain health is primarily due to the presence of nutrients in them. The availability of polyunsaturated fatty acids, vitamins, minerals, and phytonutrients are strongly associated with different aspects of brain health. Also, there are various factors that could influence the cognitive functions such as oxidative stress, inflammation, and metabolic regulation. Regular consumption of nuts is also associated with reduced damage due to oxidative stress and inflammation.

Walnuts which are known for its benefits on health can provide protection to different cells in the brain which are important for the process of thinking, memorizing, and other functions.

There is evidence that suggests that dark chocolate is one of the best things to consume to boost mental health.  It is one of those things that can work within some time after its consumption. One of the simplest explanations to the said point is that it boosts the mood, chocolate consumption if often followed by happy and better mood. There are many psychoactive components that are present in the dark chocolate and are known to increase the functionality of the brain and some of them include flavanols, theobromine, and caffeine.

Prolonged and frequent exposure to stress is one of the common causes of impaired mental health and chocolate is often considered to be a stress buster. It also contains many compounds that has a strong impact on behavior of a person.

Tags:  Dangerous Effects Of The Stress,  5 myths about depression you were practically believing,  5 things you didn’t know about the seasonal affective disorder,  How can Schizophrenia make you a daydream believer?
← Previous Next →
Related Posts
Categories
Recent Posts