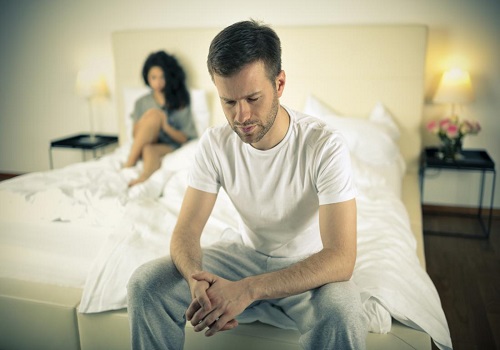 What is Sexual Dysfunction?

Some of these conditions are diabetes, heart disease and vascular disease, neurological disorders, chronic diseases like kidney or liver failure, even addiction to alcohol, smoking or even drugs could lead to sexual disorders. Sometimes even medications like antidepressants can affect one’s sexual drive. Even a low level of testosterone can be the cause of sexual dysfunction in men.

There are also psychological disorders that can affect a man’s sexual drive. Sometimes it can happen simply if you are too concerned about your sexual performance. If you are too concerned about how you might perform, the inhibitions itself could create a problem. Other issues like work-related stress and anxiety can also cause sexual dysfunction in men. Depression, guilt about something, past sexual trauma and even problems in your conjugal life or in other relationships can be cause for sexual disorders.

So what happens when you have a sexual disorder? Most men face problems when it comes to ejaculation or getting or keeping an erection. Some men also have a reduced sexual drive. Let us have a look at some of the male sexual problems.

3. Delayed Ejaculation - On the other hand, one may also face inhibited or delayed ejaculation wherein it takes too long for the male to reach an orgasm and ejaculate. The other ejaculation disorder is retrograde ejaculation. In this situation, the semen enters through the bladder instead of through the penis and through the male may reach a sexual climax, he may ejaculate little to no semen at all. Men who have diabetes and suffer from diabetic nerve damage are most likely to have this sexual dysfunction. It can also be a side effect to some medication or it could also happen after an operation on the bladder or the prostate. Retrograde ejaculation can also result in infertility.

4. Low Libido - Low libido can also be a problem for men. It means that your desire for sex has decreased. This condition is linked with low testosterone levels since testosterone is the hormone that maintains a man’s sex drive and sperm production among other things.

Medicines for male sexual dysfunction can be different depending on the sexual disorder that you have. Some oral medications like viagra and cialis are usually prescribed to help in the case of sexual dysfunction in men. Medications like Cenforce and Vidalista are also prescribed to treat sexual disorders in males. There are also various other treatments that your doctor will explain to you. Each of these will have risks and benefits and you and your partner will have to choose the best way to go.

Sexual dysfunction is not untreatable so one should not worry too much about it or you may only make the situation worse. You should seek out the help of your doctor who can advise you on what needs to be done next.