How Can Midnight Snacking Be Unhealthy? 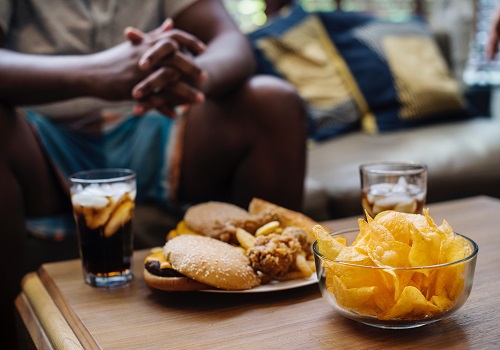 We all have heard that midnight snacking contributes to weight gain and poor eating habits but do we all know that it also contributes to the impairment of various important functions of the human body?? Nighttime eating, particularly before bed, can have negative outcomes as bedtime intake of calories promote negative changes in the healthy population. Numerous studies demonstrate that the result of ingested nutrient changes throughout the day and when the nighttime intake is compared to daytime intake, it can lead to overeating and weight gain with metabolic consequences. Therefore when food is consumed prior to sleep, it causes adverse effects on the health.

When a person does a caloric intake >25% of total daily after dinner or by two or more weekly nocturnal awakening accompanied by food ingestion, it is known as night eating syndrome. This eating disorder is defined as morning anorexia, evening hyperphagia, and insomnia and it plays a great role in an increased body mass index. This syndrome develops due to synchronization between the circadian rhythm of food ingestion and sleep, which results in a delayed pattern of food intake. People with night eating syndrome are at high risk of comorbidity. Also, various studies suggest that people with this disease consume double the amount of carbohydrates and proteins and almost four times the fat in regular meals as compared to people who do not have night eating syndrome. Consuming large meals late in the evening increases the susceptibility to obesity and other health problems.

Obesity is one of the biggest public health concern issue and it is characterized by the increased body mass index due to an increased consumption of more nutrient poor foods that contains high level of sugar and saturated fat combined with reduced physical activity. A large amount of food intake in the evening associated with greater body mass index and an increased risk of weight gain or obesity even after maintaining regular physical activity. Obesity is highly associated with night eating syndrome and people with this eating disorder tend to have more sleep disturbances. Sleep duration plays a significant role in human behavior and when the duration of sleep is disturbed it is like getting more opportunities to eat and promote unfavorable changes in the body. Also, disturbed sleep often leads to tiredness which in turn results in less physical activity and more caloric intake. Hence, an increased risk of developing obesity.

Also Read: Benefits Of Indian Gooseberry For The Health

Diabetes mellitus is a disease that is defined as high blood sugar level in the body due to impairment in the functioning of the pancreas. Diabetes mellitus is primarily of two types- type 1 diabetes which develops when the body fails to make hormone insulin that controls the glucose level. And type 2 diabetes which develops when the body fails to use insulin properly. Late night eating has a direct impact on the blood sugar level and it increases the glucose level in the body which leads to the occurrence of diabetes mellitus. We all are aware that what we eat and how much we eat has a direct impact on the sugar level of the body. The carbohydrates of the food that an individual eats during nighttime is stored in the body which increased the body weight and contributes to the development of diabetes. The development of insulin resistance is an important component for the development of diabetes and obesity can worsen the symptoms of insulin resistance. There is a close relationship between obesity and the development of diabetes and for each kilogram of weight gain, the risk of developing diabetes increases.

The heart gets oxygen and nutrients through the blood vessels and when the supply of blood to the heart is cut off, there is a decrease in the supply of oxygen and nutrients it causes damage to the heart. Whenever there is a sudden blockage, it leads to a heart attack. Heart attack or stroke occurs due to the blockage that prevents the blood from flowing to the heart or to the brain. The most common reason that leads to the blockage is a buildup of fatty deposits on the inner walls of the blood vessel that supplies the heart and the brain. The unhealthy diet is one of the most significant factors that contribute to the buildup of fatty deposits. Most heart problems tend to develop slowly and over years. Damage to arteries causes heart attack and stroke. Eating prior to bed increases fat oxidation of the whole body which increases the cholesterol level in the body. Cholesterol is an important component of the body but an increased cholesterol increases the risk of developing heart disease.

The prevalence of unhealthy eating habit is increasing rapidly among people these days, especially in teens. They adopt an unhealthy lifestyle which includes sleep deprivation and midnight snacking and both these factors are responsible for a various health problem. It is recommended to quit midnight snacking.

Tags: How Lack Of Sleep Can Be Dangerous?, All you need to know about vomiting and nausea, Weird reasons you binge on junk foods at night, How to train your mind to hate junk?