Natural Ways To Improve Your Memory 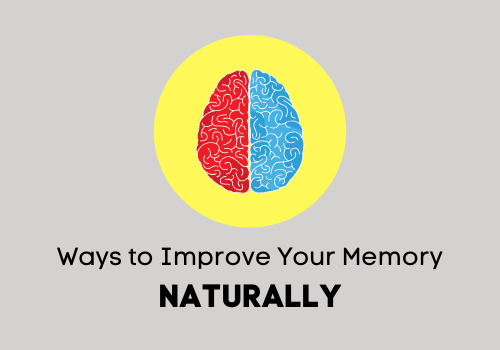 One in every nine U.S adults has been reported to experience issues related to memory. In case you are a middle age person and experiencing symptoms of losing memory, you are not alone.

According to the U.S Centers for Disease Control and Prevention, a decline in your mental health is an initial symptom of Alzheimer’s disease or dementia. Dr Gad Marshall, associate medical director of the Center for Alzheimer Research and Treatment says, “Even though the loss of memory is more common with ageing, but it’s not a part of ageing.”

Somewhere or the other, a person forgets some things from time to time, especially during the busy schedule. This is normal but on the other hand, having a poor memory can be frustrating.

Genetics plays a vital role when it comes to memory loss, especially in serious neurological conditions, such as Alzheimer’s disease. Whereas, researchers have shown that diet and daily habits have a major impact on memory.

In order to help you to deal with such memory issues, here are natural ways to improve your memory.

1. Include Antioxidants In Your Diet

Antioxidants are a type of compounds that prevents damage to the cells in the body. If consumed in a large quantity, it also helps in defending it against oxidative stress from potentially damaging free radicals.

Studies on the health effect of antioxidant supplements have found that including antioxidant-rich food in your diet helps your help to protect from ageing-related damage.

Food items, such as blueberries, dark chocolate, artichokes, pecan, strawberries, red cabbage, raspberries, beans, purple and red grapes, Spanish, beets, kale, and orange vegetables that will help a person to boost the antioxidants in their diet.

According to the case studies, it has been found that consuming much-added sugar may result in chronic health complications, such as cognitive decline. It is also noticed that added sugar may also lead to poor memory and reduction in the part of the brain that stores short term memories.

Reducing the amount of sugar intake not only helps your brain to function well but is also beneficial for your bones and body.

Many researchers have said that consuming fish and fish oil improves memory, especially in older people. Not only this, but one study also found that among 36 old adults having mild cognitive impairment got improved along with working memory scores soon after they developed the habit of consuming fish oil for 12 months.

Apart from these, a recent 28 studies conclude that after older adults start to experience symptoms of memory loss, they started consuming supplements that are rich in DNA and EPA, such as fish oil that improved their episodic memory.

4. Develop A Habit Of Meditating

The reason behind this, because meditation and relaxation techniques improve short term memory in people of all ages. It is a habitual process of training your mind in order to focus and redirect thoughts.

Meditation increases awareness of yourself and surroundings. People practice meditation for other benefits, such as positive mood, reduce stress, improve concentration, self-discipline, healthy sleep patterns. All these qualities can help a person to improve his memory.

Meditation is also useful to patients suffering from short term memory of all age group. It is not only good for your body but also to your brain and improves spatial working memory.

A healthy weight means the optimum weight of a person according to its height. Having a healthy weight is important and is one of the best ways to keep mind and body in good condition.

Many studies have considered obesity as a leading cause of improper mental health. In fact, having an unhealthy weight may change your memory associated genes in the brain and creates a negative impact on memory. Hence, obesity is associated with poor mental health.

A study was performed on a group of 50 people of the age group between 18 to 35 in order to know the connection between obesity and mental health, The results showed that people with height body mass index had worse performance on memory tests.

Unhealthy weight puts you in a risk of cognitive decline and also in developing Alzheimer’s disease. Therefore, maintaining a body mass index within the normal range may help you to avoid issues related to obesity, such as poor memory.

Research shows that an insufficient amount of sleep is associated with poor memory or memory consolidation, a short term memory strengthened and transformed into long-lasting memories.

It has also been proven that insufficient sleep gives a negative impact on your memory. Based on this an examination was made on a group of 40 children of the age group between 10 to 14. The group was divided into participants, one of which was allowed to sleep between the training and testing and the other was not.

After the examination of both the groups, t was clear that the group which was allowed to sleep between the training and testing performed 20% better than the other one.

7. Develop A Habit Of MIndfulness

It is a state of mind in which a person develops a habit of focusing on the present situation, maintaining awareness of the surrounding and feelings.

Mindfulness and meditation aren’t the same things. Mindfulness is a mental habit which is used while meditating whereas meditation is a more formal practice. Studies have shown that mindfulness is effective in treating stress, a habit of overthinking and also improves concentration.

Regular physical activity is not only good for your mind but also to your entire body. Physical activity doesn’t mean you have to work out for hours, even a moderate exercise for a short duration will also help you to improve cognitive performance, including memory and that of in all age group.

According to the research, exercise improves brain function in people of all age group. Just like a study which involves 144 people of age between 19 to 93 showed that 15 minutes of regular moderate exercise is enough to improve cognitive performance and memory.

Many other studies have also shown that some exercise may also increase the secretion of neuroprotective proteins and improves the growth and development of neurons and brain health. It also decreases the risk of developing dementia later in life.