Having Trouble In Breathing During Sleep? Check If You Have Obstructive Sleep Apnea 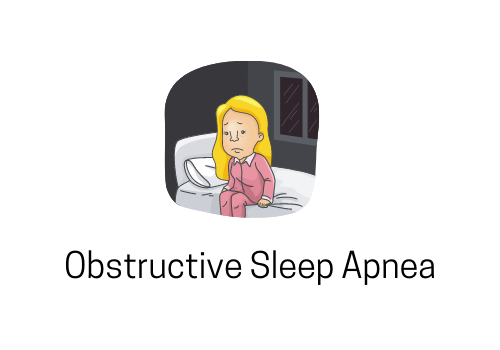 Check If You Have Obstructive Sleep Apnea

People suffering from obstructive sleep apnea experience the following symptoms, such as:-

There are some additional symptoms to sleep apnea, such as:-

See What Made You Suffer From Obstructive Sleep Apnea?

Obstructive sleep apnea is a dysfunction in which the muscles in the back of your throat relax too much. This is done to support structures, such as the back roof of your mouth (soft palate), the triangular piece of tissue (uvula) hanging from the soft palate, tonsils, and tongue.

Your airway becomes narrow as you breathe, and breathing may be inadequate for 10 seconds or even longer due to muscle relaxation. Consequently, this reduces the level of oxygen consumption in the blood, causing carbon dioxide production more than oxygen.

The sense of insufficient consumption of oxygen reaches the brain, and it is he who wakes you up so that you can reopen your airway. Such awakening is usually so brief that you don't remember it. It will feel like shortness of breath that corrects itself quickly that corrects within one to two deep breaths. Therefore, people sometimes snore, choke, or make gasping sounds.

This pattern of breathing may occur 5 to 30 times every hour the whole night and will impair the ability to reach the desired deep, restful phases of sleep. Consequently, this will make you feel sleepy during sleeping hours.

This relaxation of muscles usually occurs in people with obesity, especially in children who are overweight.

What Is The Leading Risk Factors For Obstructive Sleep Apnea?

Anyone can suffer from obstructive sleep apnea. Although, some factors put you at increased risk of OSA, such as:-

What Is The Diagnosis Code For Obstructive Sleep Apnea?

In order to diagnose your condition, your doctor may examine your signs and symptoms and may ask you to go for certain tests. In some cases, the doctor may refer you to a sleep specialist for further evaluation.

A sleep specialist may require additional evaluations to diagnose your condition(severity of your condition, plan and treatment). The examination can take overnight monitoring of your breathing and other body functions during sleep. Tests to detect obstructive sleep apnea are as follows-:

At the time of this examination, you will be hooked up to equipment that will monitor your heart, lung, brain activity, breathing process, arm and leg movements, and blood oxygen levels while you sleep. This full-night study will be conducted all night or a split-night sleep study.

During a split-night sleep study, you will only be monitored during the first half of the night. In case you start experiencing obstructive sleep apnea during the process, the staff may provide you with continuous positive airway pressure in the second half of the night.

For some cases, the doctor will provide you with a home version of polysomnography to examine obstructive sleep apnea. Such examination usually examines airflow measurement, breathing patterns, blood oxygen levels, limb movements, and snoring intensity.

How To Treat Obstructive Sleep Apnea?

For minor cases of obstructive sleep apnea(OSA), the doctor may suggest some lifestyle changes habits, such as:-

As mentioned earlier, any of the treatment does not work, consult with your doctor immediately.

In case you have obstructive sleep apnea(OSA), positive airway pressure may help you get rid of it. In this procedure, the machine delivers air pressure through a piece that fits into your nose by placing it over your nose during sleep.

Positive airway pressure owers the risk of respiratory events that occur during sleep reduces daytime sleepiness and improves your quality of life.

Despite positive airway pressure being an effective treatment, an oral appliance is an alternative to this method for some people suffering from mild or moderate obstructive sleep apnea. These devices will help you reduce your sleepiness and will improve your quality of life.

These devices help to keep your throat open. Some help by keeping your airway open by bringing your lower jaw forward. While some help by relieving snoring and obstructive sleep apnea or by holding your tongue in a different position.

It is a surgical procedure that reduces your obstructive sleep apnea by tightening your throat tissue. In some cases, laser-assisted uvulopalatopharyngoplasty (LAUPPP) is more effective than UPPP.

In some cases, the doctor tries to remove tissue from the back of the throat with a laser (laser-assisted uvulopalatoplasty) or with radiofrequency energy (radiofrequency ablation) to treat OSA.

Such a device is usually approved for people with moderate to severe obstructive sleep apnea(OSA) who cannot tolerate CPAP or BPAP.

Consult your healthcare specialist in case you are experiencing daytime drowsiness or constantly having problems sleeping. Obstructive sleep apnea(OSA) has many treatment options to reduce the symptoms. Consult with your doctor in case you have any confusion.