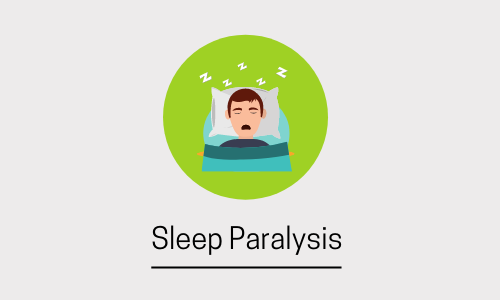 Studies suggest that most of the victims of "the old hag syndrome" awake to discover they are unable to move, although they can feel, see, hear and smell. Some feel as if there's a heavyweight has been placed on their chest, or that there is an evil monster or sinister present in the room. People often get terrified and are not able to understand what's happening to them.

The name of the syndrome - old hag - has derived from a superstitious belief that some witch or an old hag is sitting on their chest, making them immobile.

Nowadays, very few people believe the above explanation. But, the frightening and confusing nature of the disease makes some people believe that there may be some supernatural forces at work like a ghost or a demon.

People often get such terrifying experiences because they seem to have full control over their senses even after they are paralyzed. The condition is sometimes accompanied by the sound of approaching footsteps, strange smells, and visions of weird shadows or sparkling eyes, and a heavyweight on the chest that makes it difficult to breathe, if not impossible. All of the senses of the victim are telling that there's something unusual going around with them.

Rather than ghosts or demons, scientists also have an explanation for the condition. They call it - "Sleep paralysis" or sometimes "Isolated Sleep Paralysis".

I've talked with a victim of this syndrome to understand how does it feel, and what the person told was like this -

"I was woken in the night by a fierce, warm breeze. I was unable to move or scream. It endured for about 30 seconds and then was gone. I saw nothing. I experienced a similar thing last week again. I was suddenly awake at night. I felt a compelling force holding me down. I wanted to sit up but couldn't. I tried screaming so that any of my family members could listen and arrive for help, but I don't know why my voice didn't come out. It again endured for 30 seconds, and again everything became normal. I really don't believe in ghosts and didn't see anything at all. I am just really perplexed and frightened."

Scientists have named this condition as Sleep Paralysis. Let's discuss some more exciting things including - what are its causes, symptoms, risks and treatment.

What Are The Symptoms Of Sleep paralysis?

Some of the most common symptoms victims of sleep paralysis usually experience are as follows:

Who Is At A Risk For Sleep Paralysis?

Many people experience sleep paralysis occasionally, and this isn't a medical condition. But if the problem starts happening frequently, it needs to be addressed. Researchers believe that some groups of people are at more risk for the disease than others, which includes the people who:

How Is Sleep Paralysis Treated?

You can do several things to minimize your risk for sleep paralysis. Some of them are listed below:

Try these simple things and get an improved quality of sleep:

CBT may help you break the sleep paralysis episodes, providing you with a sense of control over physical sensations and awful emotions.

Most people work with a therapist to try cognitive behavioural therapy.

Baland Jala, a sleep researcher, suggests a variation on CBT to disrupt or cease the episode. His process involves the following steps:

In case you are having more frequent episodes of sleep paralysis that it influences your ability to function during daytime, or if the incidents are causing you much stress or anxiety, talk to your doctor. He may prescribe certain medications that are typically utilized as sedative antidepressants.

Low doses of such drugs have proven to be very useful in some people according to research. Your doctor may also prescribe these medications along with CBT for best results.