All You Should Know About Peptic Ulcer Disease 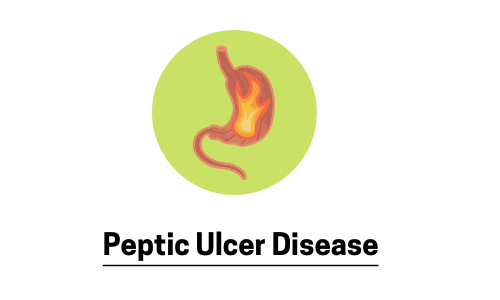 Open sores that occur on the stomach's inside lining and the upper portion of your small intestine are known as peptic ulcers. Stomach pain is the most common symptom of peptic ulcers.

Additionally, peptic ulcers are of two categories, such as:-

Possible causes of peptic ulcers are infections caused by the bacterium Helicobacter pylori (H. pylori). Additionally, long-term use of nonsteroidal anti-inflammatory drugs (NSAIDs), such as ibuprofen (Advil, Motrin IB) and naproxen sodium (Aleve), can also lead to the occurrence of peptic ulcers. Stress and spicy foods do not contribute to the development of peptic ulcers. But, yes, they can make your condition worse.

As per the systematic review of 31 published studies, the pooled incidence of uncomplicated peptic ulcer disease (PUD) was approximately 1 per 1000 person-years in the general population.

More than 6 million population in the United States are affected by peptic ulcers every year, resulting in a high economic cost to the healthcare system, says the Center For Disease Control And Prevention.

What Are The Symptoms Of Peptic Ulcer Disease?

Burning stomach and pain is the most common peptic ulcer symptom. Acid of the stomach makes the pain worse, as does having an empty stomach. Some food items that buffer stomach acid and acid-reducing drugs can help you resolve the pain temporarily. But the pain usually gets worse between meals and at night. In fact, some people with peptic ulcers don’t even have symptoms.

Here are some of the consequences of the development of ulcers, such as:-

When the acid produced by the stomach eats its own inner surface or small intestine, an ulcer develops, known as a peptic ulcer. The acid is strong enough to cause you a painful open sore that can cause bleeding.

The human digestive system is coated with a mucous layer that protects against acid but only up to some extent. In case the stomach starts secreting an excess amount of acid, these layers of mucus start getting eroded. Once the mucus is eroded completely, an ulcer is developed on that particular location, causing peptic ulcer disease.

Below are the possible reasons why the mucus layer gets eroded and cause peptic ulcer disease:-

It is not that clear how bacteria spreads, but as per the doctors, it might get transmitted from one person to others through close contacts, such as kissing or sharing food or water.

Some other painkillers include ibuprofen (Advil, Motrin IB, others), naproxen sodium (Aleve, Anaprox DS, others), ketoprofen, and others but not acetaminophen (Tylenol, others).

How Is Peptic Ulcer Disease Diagnosed?

The first line diagnosis of peptic ulcer is a medical history and some physical examinations. For that, the doctor may ask you to go under some diagnostic tests, such as:-

The lens attached to the equipment helps the doctor to examine the inside stomach and intestines. In case the doctor suspects an ulcer, he might take a small tissue of it in order to examine it under a microscope(biopsy).

This examination procedure is usually recommended for older adults or people with severe peptic ulcer disease symptoms, such as difficulty while swallowing or eating.

During such examination, the person has to swallow a white liquid (containing barium) that coats the digestive tract making the ulcer more visible.

Can Peptic Ulcer Disease Be Cured?

The medicine course duration depends on the severity of the disease, but in most cases, the antibiotics are prescribed for two weeks. Usually, only antibiotics are not enough, additional medications may be required to lower stomach acid, along with a proton pump inhibitor and possibly bismuth subsalicylate (Pepto-Bismol).

Long-term use of PPIs at high doses increases the risk of hip, wrist, and spine fracture. Therefore, please consult with the doctor before consuming any medicine and take them as directed.

Such medicines can help you relieve the peptic ulcer symptoms but cannot be used to cure it.

Such medications include sucralfate (Carafate) and misoprostol (Cytotec).

What Are The Complications Of Peptic Ulcers?

If the peptic ulcer is left untreated, it can lead to some complications, such as:-

How Long Can You Live With A Peptic Ulcer?

Peptic ulcers that are developed because of medications will begin to heal shortly after you stop taking medicine. Anti-acid medicine can help you resolve the symptoms within 2-6 weeks.

Ulcers caused by H. pylori bacteria can heal once the bacterias are killed. This can be done through antibiotics along with acid-suppressing medicine and may take 2 weeks to resolve.