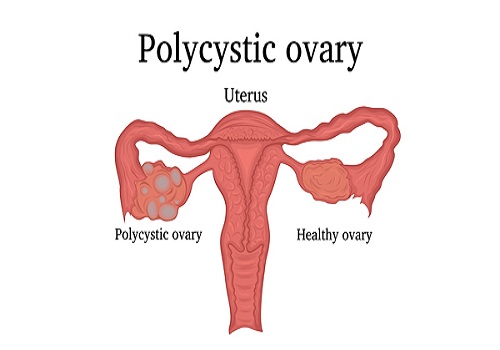 Polycystic ovary syndrome is a hormonal disorder that affects the women’s menstrual cycle. Along with menstrual cycle, polycystic ovary syndrome also affect fertility and the aspect of the appearance of a woman. It is one of the common abnormality in the reproductive aged women and the women who are diagnosed with this disease must have two of the three manifestations:

Polycystic ovary syndrome is associated with a wide range of symptoms which can have a significant impact on the quality of life a woman. Some of the common symptoms of this PCOS include:

Hirsutism is a common manifestation in women having polycystic ovary syndrome and it is characterized by excessive hair growth in the areas of the body that are androgen dependent. It is caused due to the hair follicles being exposed to elevated levels of androgens. Androgens are present in both men and women but men have these androgens in a higher level as compared to women. When the level of androgens is elevated in women, it causes problems. Androgens cause changes that lead the terminal hair to grow faster and thicker.

Acne is another common marker of polycystic ovary syndrome. In fact, PCOS is the most common underlying condition

Although the main clinical features of polycystic ovary syndrome are hirsutism, acne, and menstrual disorder,  it is also associated with various health disorders and primarily it is associated with obesity and diabetes.

Obesity is a condition in which an individual is overweight due to the accumulation of excessive fat in the body, to such an extent it starts causing problems. Multiple studies have stated a link between PCOS and obesity and women having PCOS tends to gain weight or find it hard to lose weight. It is believed that inability of the insulin to function normally is the main cause of gaining weight. Women who have polycystic ovary syndrome have a high risk of being overweight.

Diabetes mellitus is a chronic condition which occurs when the blood glucose level in the body becomes higher than the normal levels and it occurs due to insulin resistance. In women with polycystic ovary syndrome, insulin resistance is the most common problem and it occurs when the insulin in the body fails to function as well as it should. Insulin resistance is the major risk factor for the development of diabetes mellitus and this is because insulin is one of the most important hormones that play a vital role in regulating the blood sugar level in the body.


Tags: Cancers That Happen To Women, Types Of Breast Cancers, Foods That Increases The Risk Of Miscarriage