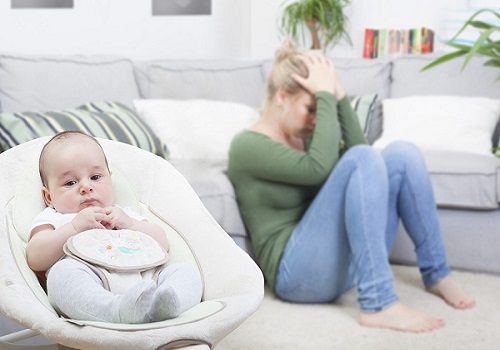 It is very common for a woman to become stressed and experience mood swings after giving birth to a baby and this is because pregnancy and afterbirth comes with a lot of responsibilities. But some women experience this mood disorder in a serious manner, and that condition is considered to be postpartum depression.

We all must have heard of the term “depression” and how it can affect the health of a person. Postpartum is a time period in the life of a woman after giving birth to a child. It is a serious mental illness which is strongly associated with the brain and significantly affects the behavior and physical health of a woman.

In medical terms, postpartum depression is defined as an episode of non-psychotic depression with onset within one year of childbirth.

The occurrence of postpartum depression differs for everyone, means some women start feeling depressed a few days after giving birth to a baby, whereas, some women may not feel depressed until weeks or months later. It is a serious mood disorder which is not only associated with extreme sadness but is also associated with symptoms like:

What are the effects of postpartum depression?

Although it is a woman or a mother who suffer from postpartum depression, she is not the only person who experience its effects. Almost every person who is closely connected to her is also affected, along with the baby. The health of a mother is highly associated with the health of a child, as it is a mother who play key roles to ensure the health or a child. Apart from that, the symptoms of this mood disorder can have a significant impact on the personal relationships as well. Many times, women with this disorder experience serious situations and problems.

Many times it is believed that baby blues is another term for postpartum depression. But there is a difference between the two. Baby blues is characterized by mood swings and other symptoms that appears within a few days after giving birth and generally go away in three to five days. On the other hand, postpartum depression is a serious problem that can occur anytime up to a year after birth. Usually, it begins within the month of giving birth.

What are the causes of Postpartum depression?

Hormonal changes during and after pregnancy is the primary cause of postpartum illnesses in a woman. The fluctuations in sex hormones are the common cause of the occurrence of depression in women after childbirth. During pregnancy the levels of estrogen and progesterone in a woman are at the highest peak and within 24 hours after giving birth to a child, the levels of these hormones drop significantly.

Generally, estrogen and progesterone are considered to be the hormones that are responsible for sexual development of a woman and menstrual cycle. But many researchers have shown that estrogen also play key roles in the central nervous system. The levels of estrogen has an impact on almost all the parts of the brain (such as the hypothalamus, hippocampus, and cerebellum) where mood, motor skills, and cognitive functions are controlled.

Some of the ways to improve the symptoms of postpartum depression