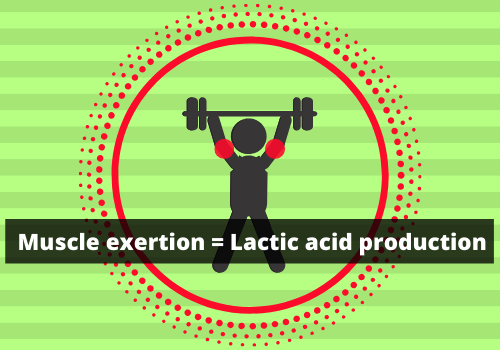 Muscles that suffer from excessive stress, because of physical activities cause an increased need for energy. This is made by the body as a response and lactic acid or lactate is produced. With the production of lactic acid, the body makes you want to slow down and rest.

When your muscles are stressed and when a lot of energy is exerted on a person completing a physical exercise repeatedly, in the same posture, He may feel the effects of lactic acid or lactate in the form of muscle soreness.

Muscle soreness may gradually become trained with short periods of lactic acid levels and they build and increased tolerance for uncomfortable effects. Lactic acid along with lactic acidosis can be prevented with the help of stretching, taking enough rest, building an exercise intensity, gradually staying hydrated and consuming nutritious food before and after working out.

Understanding The Role Of Lactic Acid

The primary reason for the production of lactic acid during exercise or working out is because glucose can be converted into energy without the use of oxygen. Lactic acid is also found in fermented milk products such as yogurt, in the form of a colorless, syrupy acid. Lactic acid fermentation creates probiotic bacteria, that help in digestion, proper bowel movement and keep digestive abnormalities at bay.

Lactate is considered lactic acid when a single proton goes missing. Lactic acid donates one proton and becomes a conjugate base known as lactate. People are most of the impression that the presence of lactic acid in the body causes even more stiffness and soreness.

This is because the production of lactate or lactic acid is felt in the form of painful sensation during exercises and prevent the human body from overworking or injuring. Lactic acid slows down the movement of the body and forces the muscles to relax

How Is Lactic Acid Produced?

Anaerobic exercises continued for a long time produces lactic acid. When the exercise becomes extremely vigorous, the demand for oxygen increases which makes it difficult for the lungs and the heart to keep up the pace, and as such lactic acid gets build up in the blood.

Also Read: Yoga- A Wonder For Grey Matter Of Brain

·         Development of a severe infectious condition, that affects the blood such as leukemia or anemia.

·         Nutrient deficiencies including low vitamin B complex nutrients or low levels of thiamine.

The human body normally reacts towards energy production and produces lactic acid. The production is temporary and not harmful to most of the cases. However, if the levels of lactic acid rise significantly it is referred to as lactic acidosis and then the process is considered to be life-threatening.

Lactic acidosis is a state of the body where the lactic acid is not being able to clear out quickly. Many factors play a key role in clearing out the lactic acid produced for energy production and include intense exercises, anemia, use of medicines, heart diseases and respiratory failure.

The symptoms of lactic acidosis are different from the production of lactic acid and include vomiting, breathing problems, abdominal pain, confusion, excessive sweating, nausea, and also sometimes the person can go to coma.

The range of normal lactic acid in the human body can be anywhere between 0.5 to 2.2 milliequivalents per liter. In the presence of an infection of the brain, the amount of lactic acid can be measured with the help of the spinal fluid instead of taking a blood sample.

Fermented foods are filled with lactic acid bacteria for example, yogurt is formed from anaerobic respiration carried out by the bacterial strains such as lactobacillus and others. Probiotic foods are primarily produced from the formation of lactic acid where glucose and 6 carbon sugars are converted into cellular energy.

The metabolic lactate is formed from the most extended form of the fermentation process is lactic acid, and depends on the microbes. The milk obtained from lactic acid fermentation can be classified in probiotics, mesophilic sour milk, and thermophilic milk.

It is best to get rid of lactic acid as quickly as possible. Try doing exercise gradually and slow down gradually as well. Make sure to have proper nutrition and have foods filled with manganese, copper, and magnesium. Include black beans, nuts, liver and organ meats along with some lentils.

Stretch and conduct a gentle movement and as much as possible. Try to prevent dehydration. In the midst of doing rigorous exercises, take “rest days”. This will help your muscles recover to some extent.