Testosterone- Everything your listening wrong about it 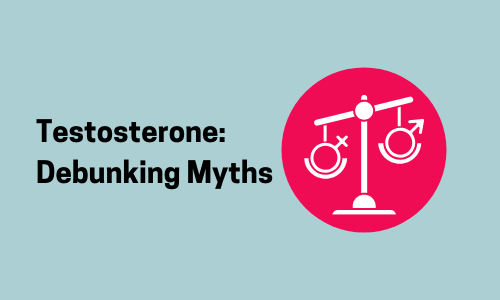 Testosterone, what is it?

Testosterone regulates the sex drive, bone mass and strength, fat distribution ad the production of red blood cells and sperms in the body of a man. There are a lot of rumours in the world that revolve around testosterone, with the help of this article, let’s fix those rumours by replacing them with facts

Myth I: Testosterone is the male sex hormone.

The website, Live Science believes that testosterone is a male sex hormone.

Which is definitely not the case since it is an important hormone for the maintenance of the female body. The receptors for testosterone are present in almost all tissues as it contributes to lean body mass, bone health, cognitive functioning and mood of an individual. This myth has been developed due to the confusion between the quantity and purpose of testosterone on the human body. Males indeed produce much more testosterone than women; however, it does not mean that it has any great functions in the male body than what it has in the female body. This myth restricts testosterone to only males and obstructs the fact that it is present to ensure a healthy woman too.

Myth II: Only women get menopause.

The loss of hormones in men isn’t as evident as it is in women, however, it does occur. In women, menopause is observable due to the lack of bleeding as it marks the end of the menstrual cycle; whereas, for men, it is more internal and covert. As men get older there comes a stage where many of the hormones that their body once produced, stop doing so in that quantity. This period is referred to as andropause or late-onset hypogonadism. It starts when males experience a gradual decline in their hormones, especially testosterone during their late thirties. These cause certain observable issues like decreased libido, bone density and muscle strength. Weight gain, depression and anxiety are also very common. A side effect of andropause, which can be treated is erectile dysfunction; with the help of sildenafil citrate tablets like Cenforce that help in curing erectile dysfunction. Click the link below to know more. The reason why andropause goes undetected is due to the wide range of what is considered: ‘normal’ testosterone levels. Men belonging to the aforementioned age group need to have anywhere between 300 to 1000 nanograms per deciliter (ng/dl), hence an individual with 301 ng/dl is as normal as an individual with a 999 ng/dl. This is an issue in the case of those with a low rate of testosterone production as the doctors will not find it alarming. Good doctors that focus on patient satisfaction provide supplements that keep their client’s testosterone anywhere between 700 to 1000 ng/dl.

The internet is filled with pop up ads that promise individuals increased stamina and boost their confidence in the bedroom if they used specific testosterone boosting pill. Some tabloids too publish baseless articles titled ‘The higher the testosterone level the greater the sexual pleasure lasts’ These headlines catch a lot of buzzes, which helps the myth spread like a forest fire.

It’s medically tested and proved that only a critically low level of testosterone is required to perform at an optimum level during sexual intercourse, anything above that level doesn’t make much difference for men or women; hence proving these articles wrong. This myth falls flat as scientists have found quite the opposite of what it assumes. Lust and sexual activities have been linked to the increase in testosterone. However, men can increase their potency by using drugs such as Cenforce 100 or Sildenafil Citrate tablets.

Along with the various stigmas that are associated with individuals belonging to the LBTQ community, it is said that individuals in the process of transitioning themselves into becoming trans-men are prone to develop cancer due to the testosterone enhancement therapy which they go through. This myth, however, stands on the borderline of being a fact or a myth, as there is no conclusive effort proving that it is either. This is mainly because trans-men as a population have not been studied on a scale that has helped doctors and scientists; in providing evidence before picking a side. The two most commonly associated cancers with trans-men are liver and ovarian.

Liver Cancer has been associated with trans-men due to certain anabolic steroids used by non-trans men during the transition process. It is important to note that, generally, men are more prone to getting liver cancer than women are, which adds onto the side effects of anabolic steroids

Ovarian Cancer cannot be pinpointed as a result of only testosterone as the individual transitioning can already be suffering from PCOS and related issues. These issues aggravate the risk of ovarian cancer for these trans-men. If you want to know more about PCOS and related disorders, click the link below.

MYTH V: ‘The best athlete has the most testosterone’

Early 2019, The International Association of Athletics Federation (IAAF) released a new regulation that required female athletes to lower their testosterone level, below 5 nanomoles per litre to compete internationally, the IAAF, just like a large portion of the world believes that the testosterone levels perform better athletically than others.

This is completely untrue as the studies conducted by the IAAF to the aforementioned myth were brutally flawed. Scientists have recreated the study and found a lot of loopholes and assumptions made by the IAAF while conducting their study to enforce this new rule.

A paper published in 2016 by the Institute of Sport, National Research Institute, Bangor University, Wales in the human kinetics journal, conducted a study which further strengthens the argument against the IAAF’s research and judgement.

However, this assumption was debunked as rigorous clinical testing was done which helped us to understand that the presence of higher testosterone was equivalent to giving a sugar pill to an old man to avoid memory loss.

The male testes produce less testosterone in comparison to how much did during adolescence however that does not mean that your testosterone content is less.

Dr Amy Guise, MD, a urologist with Froedtert & the Medical College of Wisconsin health network, debunked this myth during an interview that has been mentioned below:

“Is low testosterone inevitable? According to Dr Guise, that misconception keeps many men from getting the care they need. “Testosterone levels decrease to a certain extent with age, so as men get older, there is a normal decline,” she said. “However, in some men, testosterone drops well below the healthy range.”

Truly low testosterone is not normal, and it can cause several health problems. “Physical symptoms may include fatigue, loss of muscle mass and decreased exercise tolerance,” she said. “Men may also experience a decreased interest in sex, difficulty concentrating, erectile dysfunction and, in some cases, depression.”

There is no universal relationship between testosterone levels and violence in teenagers. There are however sociological studies that indicate that students with high testosterone levels are more popular and liked by their peers. MRC unit of the Institute of Psychiatry suggests that observational learning is the key driver of behaviour, especially in the context of violence in teenagers. If the adolescent is near-violent peers and parents then they too show violence. This has also been witnessed during the tests conducted by Dr Bandura with the ‘Bandura doll experiment’. Neuroscientist, Dr Steven Pinker believes that this myth has been developed due to the society using the teens belonging to low-income level homes, who need to develop aggressive techniques to earn money as the sample group, to base their stigmatized conclusion. It is prevalent in individuals belonging to the lower social gradient to commit acts of theft and petty crimes to meet their daily needs; however, they cannot be used to define the behaviour of an entire age group.