Tomatoes Has Many Health Benefits - Know Some Of Them 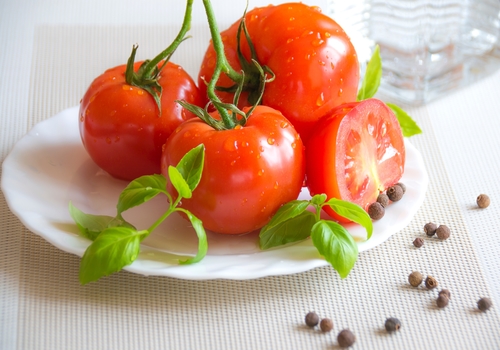 Tomatoes has always been appreciated for its culinary properties, but multiple studies has shown that tomatoes are not only tasty, but they should also be valued for its nutritional and health traits. Tomatoes are natural remedy for various health conditions as it can help in improving the health of a person in many ways and reduces the risk of developing multiple health problems.

Tomatoes are loaded with all kinds of health benefits. This is primarily due to the active constituents present in it. Although there are various beneficial constituents in the tomatoes, the most beneficial and active constituent is lycopene. Lycopene is the antioxidant that protects the body against the powerful action of oxygen radicals. It protects an individual against almost all oxidative radical, thus provoking oxidative damage. Tomatoes also contain other protective mechanisms such as antithrombotic and anti-inflammatory.

Tomatoes reduce the risk of dying from cancer

Cancer is a disease which occurs when the normal cells in the body become cancerous due to overgrowth of the cells. The cells that need to be replaced by the new cells are not replaced, but they continue to grow. Tomatoes is one of the food product that helps in reducing and treating cancer. Lycopene which is an active ingredient is a powerful inhibitor of various types of cancerous cells such as breast, lung, and endometrial.

Apart from lycopene, other ingredients that are found in tomatoes which helps in reducing the risk of cancer include tomatoes coumaric acid and chlorogenic acid. These compounds block the effects of nitrosamines (one of the strongest carcinogen) and by blocking the effects of nitrosamines, the risk of developing lung cancer is reduced significantly.

According to the studies, people who consume at least 10 serving of tomatoes a week have a reduced risk of suffering from prostate cancer. It reduces the risk to about 40%. Another study proved that there is a decrease in the risk of suffering from rectal or stomach cancer of approximately 60% in people who consume more than 7 servings of raw tomatoes.

Hypertension, also known as a silent killer is one of the leading causes of deaths associated with cardiovascular disease. Commonly, hypertension is known as high blood pressure as it is a disease. Hypertension is a serious disorder which can affect every person differently and could lead to death. Most often, hypertension is left untreated as it does not show any symptom and remains undiagnosed until it starts to affect different parts of the body and develop its symptoms. This is the reason why it is often considered to be a silent killer. Tomatoes contain many ingredients that have the capability to reduce the pressure on the walls of the arteries.

Tomatoes help to keep the skin glowing and healthy

There is so secret that we all work towards making our skin look healthy and glowy and often look for ways to make it better. Well, tomatoes are another way to improve skin health. Tomatoes contain many ingredients and compounds that work exceptionally well on skin. In fact, various compounds of tomatoes are used to make cosmetics such as facial cleanser. Lycopene is one such compound that is widely used in the cosmetic industry.

Using tomatoes directly on the skin is an easy and effective way to get healthy skin. You just to peel some tomatoes and keep them on the skin with the inside of the tomato touching the skin. It is an effective and proven remedy for various skin problems such as dark spots, acne, and rashes. It also helps to get rid of sunburn and tanning, which are the most common complaints of people.

Tags: Honey- A Remedy For Many Health Problems, How Food Improves Your Immune System?, How Can Beetroot Be A Superfood?