What To Do When Someone Has Panic Attack Before You 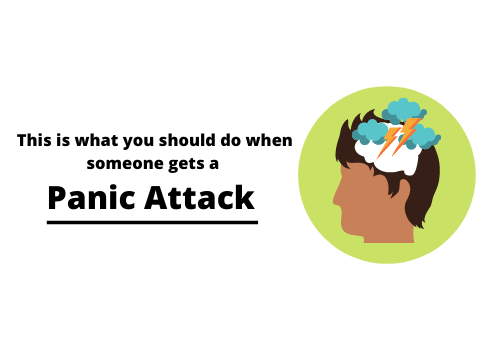 Before coming to the topic it is essential to get some idea about the panic attack. It is a type of anxiety disorder that affects almost 2.4 million U.S adults and usually begins when a person is in late teens and early adulthood. The attack lasts for 10 minutes which includes sweating, a rapid increase in pulse rate, feeling faint or choking and the sense of becoming crazy.

A panic attack is a cause of sudden intense fear that triggers various physical reactions despite no real danger or actual cause. This attack turns out to be a panic disorder when a person has experienced continuous unexpected panic attacks and still has a fear of experiencing another for a long period of time.

Many people get frightened because of such attacks thinking that it is a heart attack but thats, not the case. A panic attack can frighten you but they are not life-threatening but can significantly affect your quality of life(mental peace). Hence, it is very important to identify the signs and symptoms of a panic attack.

The panic attack symptoms can start to occur anywhere without warning the person, it can occur while driving, in public places, while sleeping or in the middle of a meeting. The symptoms involved in this varies with the peak time and may feel fatigued, tired and many more, such as:-

The most common and worst feeling during the attack is life-threatening fear. The intensity of the panic attack is so much that you will feel frightened about the places where it can happen.

Additionally, curing a disorder means fixing the cause of it. Therefore, it is also important for a person to know the cause of the attack.

Cause Of Panic Attack

There are some common causes of occurrence of panic attacks, such as:-

Some researchers believe that human’s body natural fight or flight response to danger is also involved in panic attacks.

What To Do If Someone Has A Panic Attack?

In case you know someone having a panic attack, it is pretty obvious that the person will become very anxious and won’t be able to think properly. In such cases, you should follow the following instructions:-

During such condition, the person may also feel relaxed if you say things, such as:-

The above-mentioned guidelines will help the person by:-

You can also advise the person for ongoing help if he/she tries to recover from panic disorder:-

Additionally, there are ways to reduce the intensity and frequency of panic attacks that will help the person to improve their daily lifestyle.

Pain attack or panic disorder can be cured with the help of two main types, such as psychotherapy and medications. The type of treatment required is based on a person’s preference, severity, and history.

This therapy will help you to know things from your own observation and experience that panic attack symptoms are not dangerous. Your therapist will not stop the panic attacks, instead, he/she will recreate your symptoms and mind in such a manner that it will cause you no harm even if its frequent.

Once the physical sensations of panic will not threaten the person, the attack begins to resolve. Successful therapies also help the person to overcome fears of situations or the cause of the attacks that the person has been avoiding.

Medications: If the cause of your panic attack is depression, medications are available for such cause. In fact, various symptoms are effective in managing symptoms of panic attacks, such as:-

In case your medication doesn’t work well, the doctor can prescribe you with some combination of medicines in order to boost effectiveness. Always keep in mind that weather medication or therapy, both ways of treating panic disorder will take several weeks after starting the medicines.

Apart from this, sich medicines may show some side effects and should be avoided in the case of a pregnant woman. Consult with your doctor in such situations

Many people get confused with a panic attack and a heart attack, so let’s clear the confusion of such people.

Tags: What not to do when someone is having a panic attack, Anxiety attack symptoms, Panic attack causes